Before Pandora, Slacker, I Heart Radio or even Real Audio, innovators at UNC Chapel Hill figured out a way to stream a live radio broadcast on the Internet with a high-speed connection to NCREN.

The first radio program to be broadcasted online was in 1993, and it was a talk show about computers and the Internet. A year later, the music industry caught on and The Rolling Stones were the first to broadcast a concert live on the Internet. Radio stations soon followed and on Nov. 7, 1994, WXYC 89.3 FM Chapel Hill, a highly-acclaimed noncommercial-educational college station serving the university and surrounding areas, became the first traditional radio station to broadcast on the Internet. WREK (91.1 FM Atlanta, Ga.) started streaming the same day using their own custom software called CyberRadio1. However, unlike WXYC, this was WREK's beta launch and the stream was not advertised until a later date. UNC viewed this feat as an experiment as well as an indication of what the Internet could be as WXYC's around-the-clock format of eclectic music and specialty shows became available to anyone around the world.

"Frankly, we had a lot of listeners, we had great compression and great support from MCNC - they didn't even notice the difference of bandwidth that we were taking it up."

The initial challenge was how to take one of the leading college radio stations in the country and broadcast it to anyone, anywhere in the world. Besides interoperability, one of the other major hurdles facing streaming media delivery was the quality gap. Admittedly, the first broadcast was rather poor in quality. But, in just a handful of years, streaming media technologies leapfrogged from less-than-standard definition to HD quality. Broadcast audio is typically mixed and delivered in 5.1 surround sound these days, whereas streaming audio is still largely a stereo affair (or even mono on occasion). Another challenge came from some on the newly-formed Internet Engineering Task Force (IETF) that formed in 1992, who feared that streaming radio would “break” the internet and eat up all the bandwidth. Connection requirements needed to be extremely high-speed with low-latency for streaming live broadcasts. And finally, there were several legal issues and hurdles to deal with in regards to licensing and copyrights and at the time there weren’t any guidelines or precedents available for this kind of technology until years later with the Digital Millennium Copyright Act in 1998.

"The Internet isn't just for email anymore. This statement is becoming increasingly true as the technology involved progresses and more resources are devoted to developing Net-based end-user applications. The Internet is ideal for wide-area transport of all sorts of data, especially when these data originate at a central source (server) and are distributed to many users (clients) on demand."

Mike Shoffner and David McConville are credited in getting the original simulcast up and running along with Paul Jones, founding director of ibiblio. This group initiated the project in a discussion with WXYC management on Aug. 18, 1994 and testing began soon afterward. WXYC used an FM radio connected to a system at SunSite, later known as ibiblio, running Cornell's CU-SeeMe software. What they determined is that by tweaking the code to disable the video feed in the CU-SeeMe software, the audio could be easily compressed and constant, greatly reducing the bandwidth required to run it in a spoke-and-hub setup. The technology actually was pretty simple. On the server side, a machine ran the reflector software, which is a type of server daemon. The reflector machine had to be on the Internet, preferably on a high-speed line, which at that time and still today comes from the North Carolina Research and Education Network (NCREN) operated by MCNC. The NCREN connection documented at the time was likely either 1.5Mbs or 10Mbps. The reflector then is fed the digitized real-time broadcast from an analog-to-digital converter. Ideally, a MacIntosh would have been used at the time to connect the reflector directly from the station mixing board in the control room. But, in this initial case, they used an ADC card on David’s Mac workstation at SunSite and then connected to a radio provided by Mike’s sister. “You do what you have to when you're on a budget,” commented Jones in a blogpost in 2014. At that point the signal that was digitized came from the radio. Later, when the setup was upgraded, the signal was taken directly off the board in the WXYC control room. The client side of the equation was even simpler. To connect, the listener needed access to a MacIntosh connected to the Internet. A user then would download CU-SeeME for free, set the reflector to the appropriate IP address, and then run it. Music of varying sound quality would then emanate from the Mac straight from the WXYC control room. The sound quality at this time was quite low (mono at best), but as the technology and resources continued to develop, the quality began to improve. At first only an Internet-connected Macintosh, model SE/30 or later, running System 7 or better, was able to access the stream. But eventually, it was setup so any device would be able to access it just as it works today. 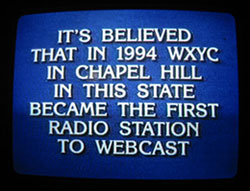 WXYC took advantage of NCREN connectivity and capacity to create the first live streaming radio broadcast in the world, breaking barriers in the fields of digital media delivery, live broadcasting and file transfer protocols for a new World Wide Web. It also extended the reach of WXYC to a global audience while further research and development continued into some of the first coding for mp3 audio formats years before independent peer-to-peer file sharing services like Napster or Kazaa hit the mainstream. Finally, it’s also quite an accomplishment to be included as a Jeopardy question on television as it was in April 1994: “It’s believed that in 1994 WXYC in Chapel Hill in this state became the first radio station to webcast.” In the spirit of the show … What is North Carolina?